Foreigners snap up more homes in the first three months of the year.

In contrast, citizens bought 1,973 homes, down 18.2 per cent, owing largely to the seasonal effect of the Chinese New Year holiday.

An analyst said that for foreign buyers, Singapore housing is still relatively attractive compared to other assets.

While foreign buyers have to pay ABSD (additional buyer's stamp duty) to purchase properties in Singapore, they will have to also pay similar stamp duties or higher taxes if they invest in other markets.

The ABSD for Singapore PRs buying their first home is 5 per cent and 10 per cent for the second and subsequent unit. Non-PR foreigners face ABSD of 15 per cent for any home purchases.

Among projects favoured by foreign buyers were CapitaLand's Cairnhill Nine near Orchard Road and Kingsford Hillview Peak by Chinese developer Kingsford Development. The 268-unit Cairnhill Nine attracted the most foreign interest with 52 units snapped up by non-PRs and 27 units by PRs. 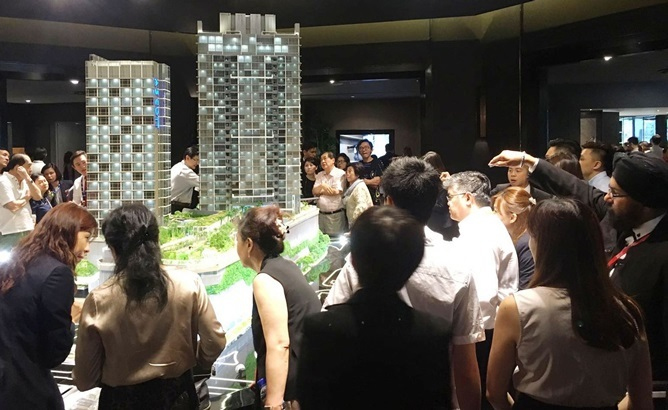 While the unit price at Cairnhill Nine of about $2,221 psf in the first quarter was higher than the average unit price in District 9, the overall price for smaller flats is relatively low, starting from $1.3 million to $2 million.

Kingsford Hillview Peak, which has rolled out discounts to drive sales, sold 10 units to non-PRs and 28 units to PRs.

Foreigners bought more properties priced between $1.5 million and $3 million in the quarter.

Non-PRs bought 40 homes costing $2 million to $3 million, up from 19 in the last three months of last year, while PRs bought 46 homes in that price range, up from 37.

Mainland Chinese and Malaysians accounted for 42.4 per cent of the foreign buys in the first quarter. Transactions by Indonesian buyers picked up in the first quarter - rising 12.5 per cent from the last three months of last year to 72 units, including 41 in the prime districts of 9, 10 and 11.

However, the 72 units are still much lower than the 338 homes bought by Indonesians in the first quarter of 2013, before the Government implemented the total debt servicing ratio framework in June that year.

The number of foreign property purchases is expected to remain stable. Many foreign buyers are purchasing for their children who are attending school in Singapore. However, they will only enter the market if there is a right product.

Notwithstanding the seasonal effects, there were signs that the market is picking up.

A total of 2,830 residential properties - including 30 units bought by companies - changed hands in the first quarter, up about 27.5 per cent from the 2,220 units sold in the same period a year earlier. The sales comprised 2,609 private condominiums and 221 landed homes.