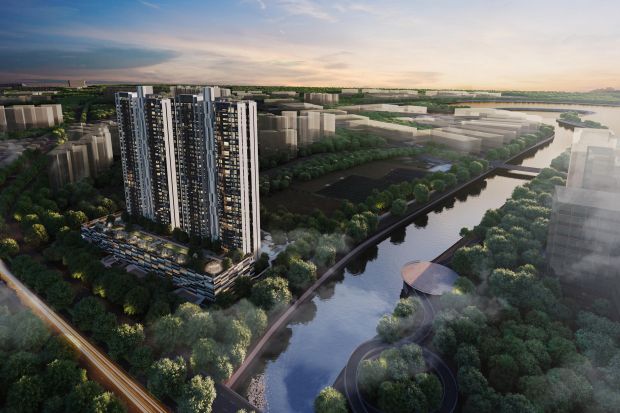 Location still trumps many factors when it comes to buying a property, going by the weekend launch of two massive 99-year-leasehold projects.

Thanks to its popular Queenstown location, Queens Peak at Dundee Road saw a take-up rate of 34 per cent as it sold 250 units of the available 736 units during its first launch weekend. Some 242 units were moved on the first day on Saturday, with one and two-bedders making up about 90 per cent of the sales, according to developer Hao Yuan Investment.

Parc Riviera at West Coast Vale, however, moved only slightly more than 100 of its 752 units on Saturday despite an unconventional pricing strategy by its developer EL Development to incentivise early birds. This represents over 13 per cent take-up of the total units.

Under a "one-tier pricing" scheme for 278 units in the project, EL Development pegged one price tag for each unit type from the lowest floor to the 15th floor of the 36-storey development. In other words, a buyer would pay the same price for a 15-storey unit as he would for the same unit on the lowest floor.

Originally meant for buyers only on Saturday, the scheme was extended to Sunday, but that hardly stoked further interest, with another couple of units sold.

As expected, over 95 per cent of units sold at Parc Riviera are those that come under one-tier pricing scheme; early birds snapped up units on the 15th floor before others pick up units on the lower floors. About 80 per cent of buyers chose one or two-bedroom units.

The average price of units sold at Parc Riviera over the weekend was S$1,150 per square foot (psf); that of Queens Peak was S$1,632 psf, with the lowest psf pricing transacted at S$1,406 psf.

EL Development managing director Lim Yew Soon told BT that while location may play a part in the sales performance, another factor at work may be the way smaller units are distributed in the project.

Unlike Queens Peak where the smaller units are concentrated on the lower floors to keep the quantums low for investors, Parc Riviera has the same unit type from the lowest floors all the way to the highest floors as the developer wanted to keep the unit-type composition on each floor consistent due to the use of prefabricated prefinished volumetric construction (PPVC).

To have different unit types stacked on top of one another would require transfer columns and beams to be erected on each floor, which will be more challenging for a project that involves PPVC, Mr Lim explained.

Some 60 per cent of the buyers could be investors and the rest upgraders, he observed. Since the one-tier pricing was an early bird promotion, the project will revert to its original price list from Monday onwards.

"We took quite a steep discount for the units on the higher floors so we can't keep doing it all the time," he said. "We are not planning for further discounts now. Based on the original pricing, it's still attractive."

Hao Yuan Investment attributed the encouraging weekend sales at Queens Peak to its direct and above-ground connection to the nearby Queenstown MRT Station as well as the design advantage where all units are at least eight storeys above ground.

"We have received feedback from buyers that Queens Peak is an attractively priced city fringe project made affordable for mass condominium buyers," said Tan Zhiyong, managing director of MCC Land, the project manager of Queens Peak.

Adapted from: The Business Times, 7 November 2016