Industrial property rentals continued their decline for the sixth consecutive quarter, falling 2 per cent in Q3 from Q2, culminating in a 6.3 per cent decline for the first nine months of this year. 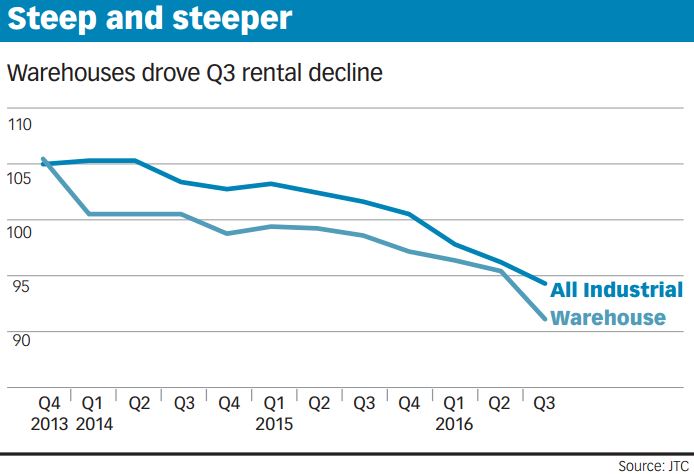 Even as some analysts think the decline could hit double-digit after including the expected lull in the fourth quarter, JTC appears satisfied that its efforts have paid off in arresting rising operating costs for industrialists.

Since 2012, the state industrial landlord has installed a slew of anti-speculation and other industrial property cooling measures - including capping land tenures at 30 years, introducing seller's stamp duties, and the latest, imposing more stringent subletting rules.

Meanwhile, weak manufacturing and trading conditions as well as greater industrial space supply have exacerbated the decline in industrial rents.

In its market report on Thursday, JTC said that from now until the end of 2017, about three million square metres (sq m) of industrial space will come onstream. This is higher than the average annual supply and demand of around 1.9 million sq m and 1.2 million sq m respectively in the past three years.

"This is likely to exert further downward pressure on occupancy rates, prices and rentals, translating to reduced business cost for industrialists," JTC said.

The full-year 2016 decline in overall industrial rents could be within the range of seven to 10 per cent. This would be a much steeper decline compared to the 2.1 per cent fall in industrial rents in 2015.

An analyst said that, looking at the government's intention, in fact they do not see this oversupply as something bad. They see it as something good because they are actually bringing down the cost of doing business in Singapore. They have a different objective altogether.
The quarter's rental decline was driven by warehouse rents which fell 4.4 per cent quarter on quarter. It was the worst-hit segment. Warehouse rents have not fallen so much since they started to soften in Q1 2014.

The deterioration of the warehouse rents could be due to the supply spike in the warehouse segment this year, where a total of 528,000 sq m came into the market in the first nine months, almost double the 274,000 sq m which entered the market over the same period last year.

Overall industrial occupancies dipped 0.3 percentage point to 89.1 per cent in the third quarter - the lowest in a decade.

If the 901,000 sq m gross floor area of warehouse space estimated by JTC comes onstream next year, 2017 will set the record as the year with the highest ever new warehouse completion, and warehouse rents will continue to suffer due to weak demand.

Overall, as competition for qualified tenants remain intense in order to adhere to the new anchor tenancy rules, some of the larger corporate landlords have been enticing tenants with more incentives.

These range from longer rent-free and fitting-out periods to covering alteration works, providing office fit-out services, subsidising repairs and waiving the requirement for tenants to reinstate their premises after their leases end.

On the transactions side, industrial property prices also fell 1.7 per cent in the third quarter - its sixth straight quarter of decline too. Prices have fallen 6.4 per cent this year. 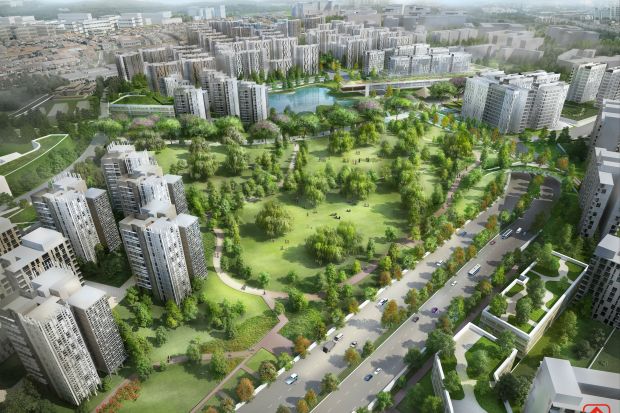 Recently, JTC also announced the consolidation of all HDB industrial properties under its wing come 2018. It told The Business Times on Thursday that this is unlikely to affect movements in its rental and price indices.

The indices as they are already cover transactions between private parties, including leases and sales of HDB and JTC properties in the secondary market. Allocations by HDB and JTC in the primary market are not included in the indices, it said.

While there are some positive vital signs of a possible stabilisation in Singapore's manufacturing sector - for example, the September manufacturing purchasing managers' index broke 14 straight months of contraction to come in at 50.1 - analysts continue to expect most industrialists to stay cost-conscious, and landlords to remain flexible in rental negotiations going forward.